Start typing and press
Enter to search
Skip to content

I hope you all had a wonderful weekend. I made a promise to myself to actually take pictures of what I ate and did this past weekend. I definitely followed through so be prepared to see lost of pictures of wonderful food.

Barrett and I stayed up pretty late watching House of Cards and when he left I ended up tossing and turning all night trying to get to sleep. So when I finally woke up around 10, I made some healthy pancakes to get my day going! French press coffee on the side because COFFEE.

I went on a quick walk to get the blood pumping but since it was 10582 degrees outside, I quickly headed back to my house to shower off and head to Spencers Coffee. It was around 12:30 so I went ahead and ordered some lunch. I was a bad vegetarian/Orthodox-faster and got the Californian with turkey breast. It was SOO good. I also got a side salad.

I got some work done and around 1 I ordered a small coffee because I was meeting my Priest to discuss this years OCF schedule. I am looking forward to what is in store for our little campus ministry this year!

With all the pancakes and that ginormous sandwich I was not really hungry until dinner. Its pizza night on Fridays at my parents house, so I came over and had the above vegetarian slice x 2. Papa Murphy‘s is good stuff! Although I think Mellow Mushroom is my favorite…or my mom’s homemade pizza. Ahhhh yessss.

Followed by 2 chocolate chip/potato chip cookies that my sister made. It was hard to stop at just 2, they were so good!

We all watched the Olympics until around 11 and then I promptly passed out.

Saturday began bright and early with a bike ride to breakfast. We rode our bikes to JD Bakery and I got the Farm Fresh Egg plate with sourdough toast, bacon, 2 eggs, and hash browns. I ate about half this because we all split a PB granola bar before-hand!

Right after we got back from the bike ride we all hopped in the car to head to 10 am Yoga at Crossfit. By the time yoga was over, I was drenched in sweat and in desperate need of a shower.

Once I was showered off, I made a simple salad with spinach, spring mix, tomatoes, mushrooms, and added a red wine vinaigrette. Plus another slice of pizza!

After watching some more of the Olympics, I took a quick nap and went to run some errands with my parents before an Almsgiving meeting at Church. 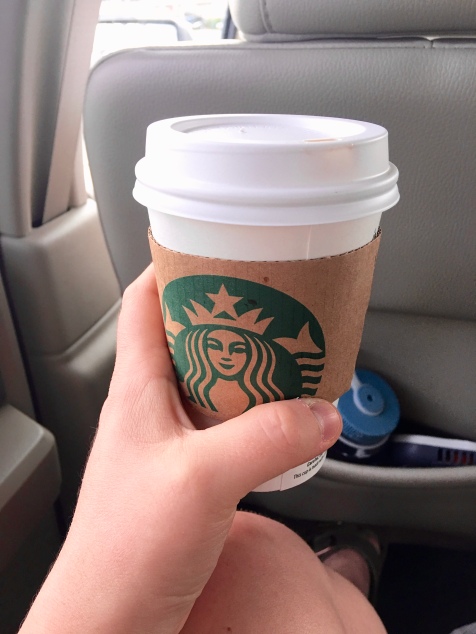 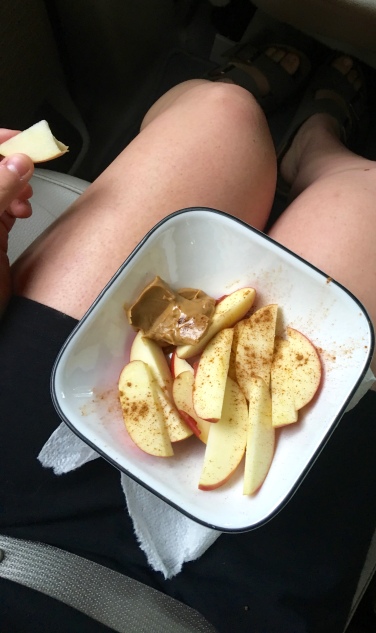 Cinnamon Dolce Cappuccino + Apples and PB eaten in the car as snacks.

And a selfie with the one and only…

I’m obsessed with her shirt.

After church, my parents and I went to Home Cafe for dinner. I challenged myself not to get the same salad I always get so I got one of the specials for the day…Shrimp Po Boy! 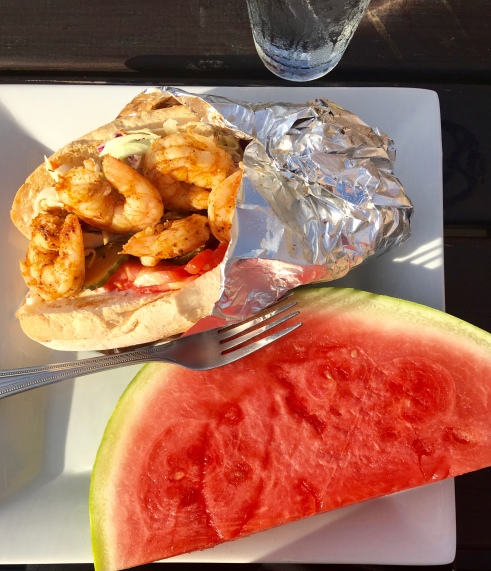 That was also the best watermelon I have had all summer.

After eating, we all went to Scottsville so I could watch one of my favorite people perform in her first Red River Fiddler’s concert. She was so good and so cute!!

On the way home I ate a handful of PB M&Ms because we all need dessert in our life.

Sunday started bright and early. I picked up a sweet elderly woman for Church, Barrett came back from St. Lois (You better believe I gave him a giant bear hug and told him how handsome he was like 204 times), all followed by the sweetest baptism of Baby Fiona. (Ohmygosh I still cannot get over how adorable that name is)

After the baptism Barrett and I headed to my parents house (surprised? haha) and he passed out for a nap while I helped my dad cook dinner. 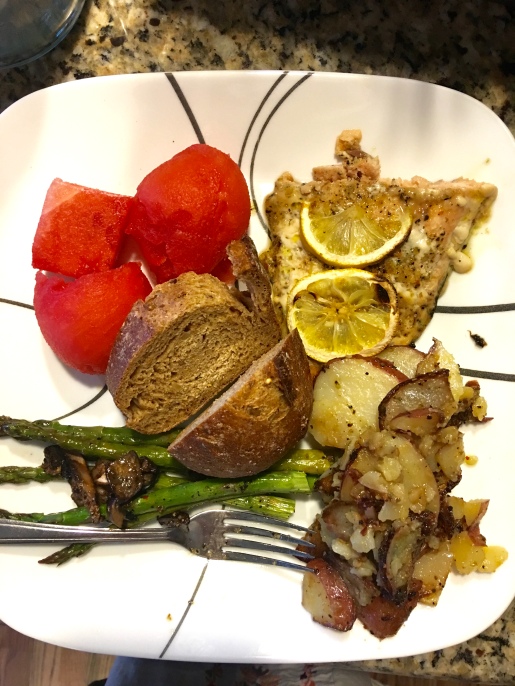 Such a delicious meal.

After my parents house, Barrett and I went to Stakz and then headed to my house to watch some TED talks. (But really he watched the TED talks and I looked at my phone hah!)

This morning began with a Crossfit workout followed by a green smoothie + coffee.

Have a great Monday!

P.S. Shoutout to my lovely and dear friend at Church who gave this to me. I think she would want to keep her name anonymous on here but you know who you are and I LOVE YOU. I am obsessed with aprons.

I am so glad you are here! I am an Aussie dog mom, avid coffee drinker, and wellness lover. You can read more about Lettuce Attend in the About section.